The industry of making

The Werkspoorfabriek
The Werkspoor District in Utrecht houses an immense industrial warehouse with a length of 175 metres. Together with several other buildings, the factory is part of the old Werkspoor. Large-scale steel constructions were processed here for civil engineering. Most of the buildings have meanwhile been demolished, but together with the Werkspoorkathedraal, the building acts as a catalyst of the area and it is a symbol for circular area development. In 2018 the Werkspoor District won the ABN AMRO Circular Economy Award. The Werkspoorfabriek is not a monument, but a highly typical, large-scale example of industrial heritage. The client accepted the challenge to preserve the building and to activate it with a wide range of work-related functions. The Werkspoorfabriek is part of an ensemble of existing buildings and the ‘Hof van Cartesius’, a circular breeding ground. It is a unique location for Utrecht where past and present are linked together in an inspiring fashion.

Functions
The Werkspoorfabriek houses a range of businesses from creative independent entrepreneurs to the large beer brewery De Leckere. Together, the businesses form a community in the creative sector and the manufacturing industry. Hospitality is available, as well as event space to stimulate meetings of various businesses that focus on the learning process of manufacturing. Examples are the training centre of Baars & Bloemhoff and Parts On Demand, where innovation takes place in the area of 3D printing. These businesses are established on the ground floor and all have their own new industrial entrance. These areas have a double height and were provided with a mezzanine floor. De Stadstuin is present on the 2nd and 3rd floor. This organisation activates the community and leases space to smaller and medium-sized creative businesses. At the head of the building a large multifunctional space was created for various purposes: parties, lectures, workshops and meetings with a fantastic view of the Amsterdam Rhine Canal. This space enables broad public use of the building and showcases the roughness of the Werkspoor past. The old crane track was preserved, and the smell of the past is still present. There are various new façade openings in the existing façades for the benefit of the new functions. They open up the building and contribute to the lively synergy between indoors and outdoors. The most important objective is the activation of the area, the building and the people who work, think, learn and manufacture here together. Space was even found for a small museum that narrates the history of Werkspoor and Zuilen, the neighbouring working class district.

Concept
The idea was to create a new structure within the free industrial space of 175x25x15 metres where businesses of various scopes and with various activities can establish themselves. Without prejudicing the industrial character, views and the length effect. In order to achieve this high level of ambition, ample surface area was added locally whilst at other locations as much spaciousness as possible was preserved. From large entrance areas to small units, always alternating in terms of perception and view. The whole forms a large inspiring journey of discovery for users and visitors. It is a factory of several businesses, spaciously and visually connected with each other. At the central entrance, the complete height of the warehouse can be seen, as well as two staircases that take you upstairs. The signature skylight and continuing steel window frames were restored and equipped with insulating glass. The idea is that with the interventions in the façades and the added new structure of open floors, it is possible to anticipate a changing demand in the future.

Façades
Several new façade openings were created where it was important that the character would not be lost. Several new entrances were created to make the building accessible and to activate it. Two at the head and a main entrance in the middle. Moreover, various entrances for businesses on the ground floor were created in the long façade. The central entrance offers access to the businesses on the 2nd and 3rd floor. The new windows on the 2nd floor, which offer panorama and daylight, were enshrined in the plane of the masonry and have thus become part of the volume. The entrances, on the other hand, are “lying on” the façade so that they are also recognisable in the longitudinal direction. These entrances were created as large industrial sliding doors with a wicket door inside. The main entrance protrudes slightly more and is also higher than the ancillary entrances. As a result, a clear hierarchy is created in the façade. Through shape and position it is clear what the existing and new façade openings are, and a clear historically layered structure is created.

Circular and flexible
The open foor on the 2nd and 3rd foor was flled with fexible units of wood and glass. In association with Sustainer Homes, Zecc devised a confguration of a modular building system within the existing rhythm of the 175-metre long warehouse. The wooden building blocks of Sustainer Homes are fexible and can easily be adjusted or repositioned. The system Respace is 100% circular and is assembled without screw and/or glue connections. The whole forms a spacious world with small bridges, stairs and views. The rhythm of the existing steel trusses was the starting point, but an extra dimension was added to it

Sustainability
Apart from circular and flexible, the entire building was insulated, provided with insulating glass and the roof was filled with PV panels. For the premises Flux Landscape designed a diagonal grid with green elements so that the area around the building is accessible. This solution is in line with the neighbouring Werkspoorkathedraal, so that a ‘carpet’ connects both buildings. All fences were removed from the premises and the building has opened up to its surroundings. The Werkspoor District is an example of a sustainable industrial area transformation. The Werkspoor District has meanwhile become the most popular business area for creative and enterprising Utrecht. In the coming years, a series of initiatives will be worked on with parties who are active in the area. Zecc is also established in the Werkspoorkathedraal, which is how it became involved in the Werkspoorfabriek.

The client about the Werkspoorfabriek
Client Bob Scherrenberg, Overvecht Vastgoed, “As a family business in Utrecht we have committed ourselves to the Werkspoor District for a long time. We contribute to the transformation of the area through the redevelopment of industrial buildings where working, learning, experimenting and meeting come together. We believe in the power of cooperation and cross-pollination. This can be seen in the design. Meeting is facilitated by spaciously set up traffic areas. An event space and skybox offer room for meetings, where external visitors are also welcome. Coffee bar Pluck is present in the main lobby, which is accessible to everyone. To strengthen the relationship with the public, the history and the neighbouring district, the ‘Museum van Zuilen’ was housed in the Werkspoorfabriek. Operator De Stadstuin is the driving force behind the facilitation of meetings between all lessees and external visitors. Apart from lease and management, they also fulfil the role of connector. Through specific programming for lessees and broader events they provide the “software” for a stimulating work environment.
The synergy between design and programming is essential. This turns us into a challenging client, which requires adaptive ability in the design process. Zecc has been very successful in creating room for wishes and active contributions of future users. Initially there was question of a top floor with basic shell units, but during the process it was gradually decided to opt for the realisation of a circular box-in-box principle, designed and built by Sustainer Homes. Wunderhund provided for the layout of the lobby and the shared areas and Flux for the layout of the outdoor premises. A big-hearted cooperation resulted in a big-hearted building where lessees and visitors feel welcome. This is already resulting in wonderful cross-connections and a tangible energy!” 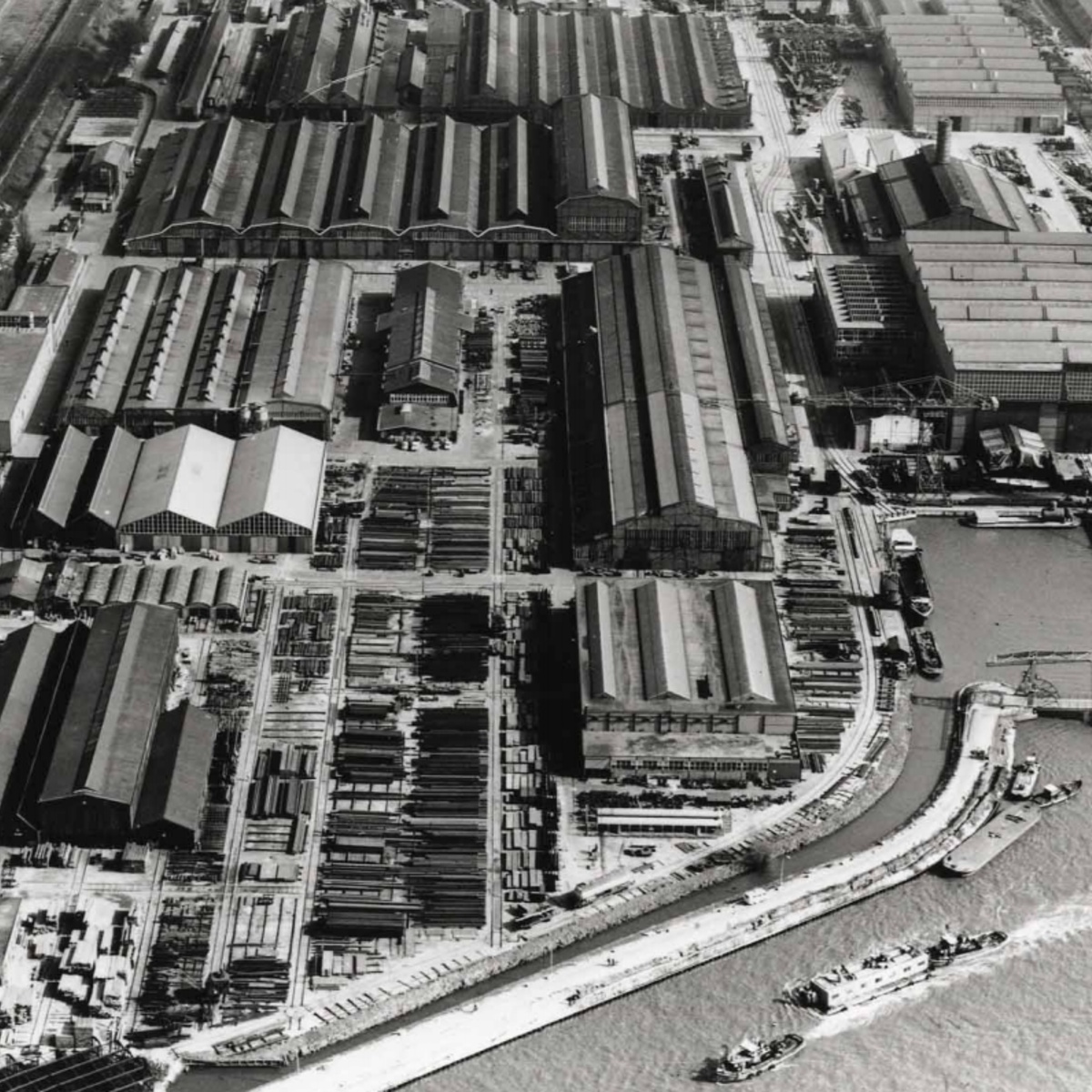 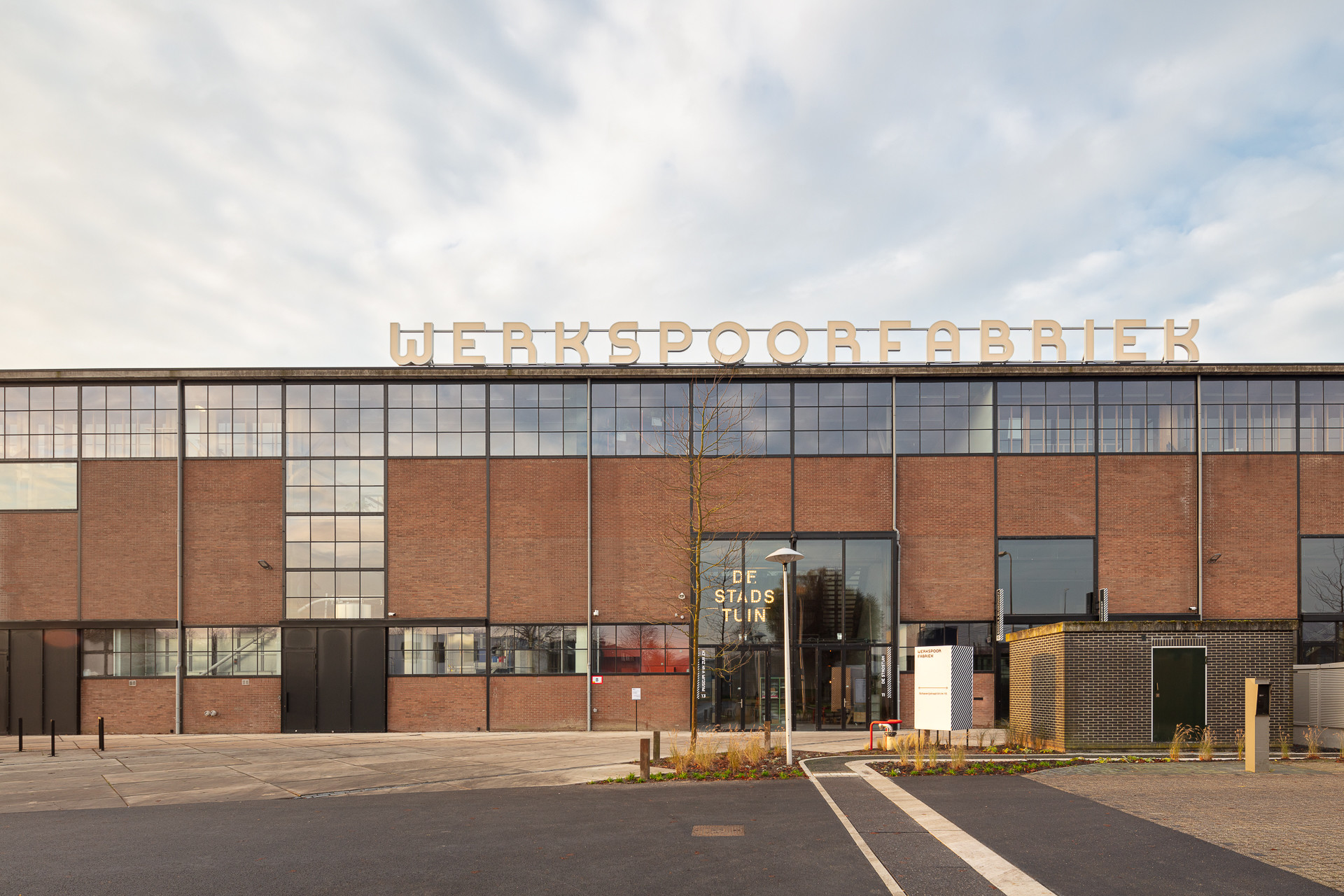 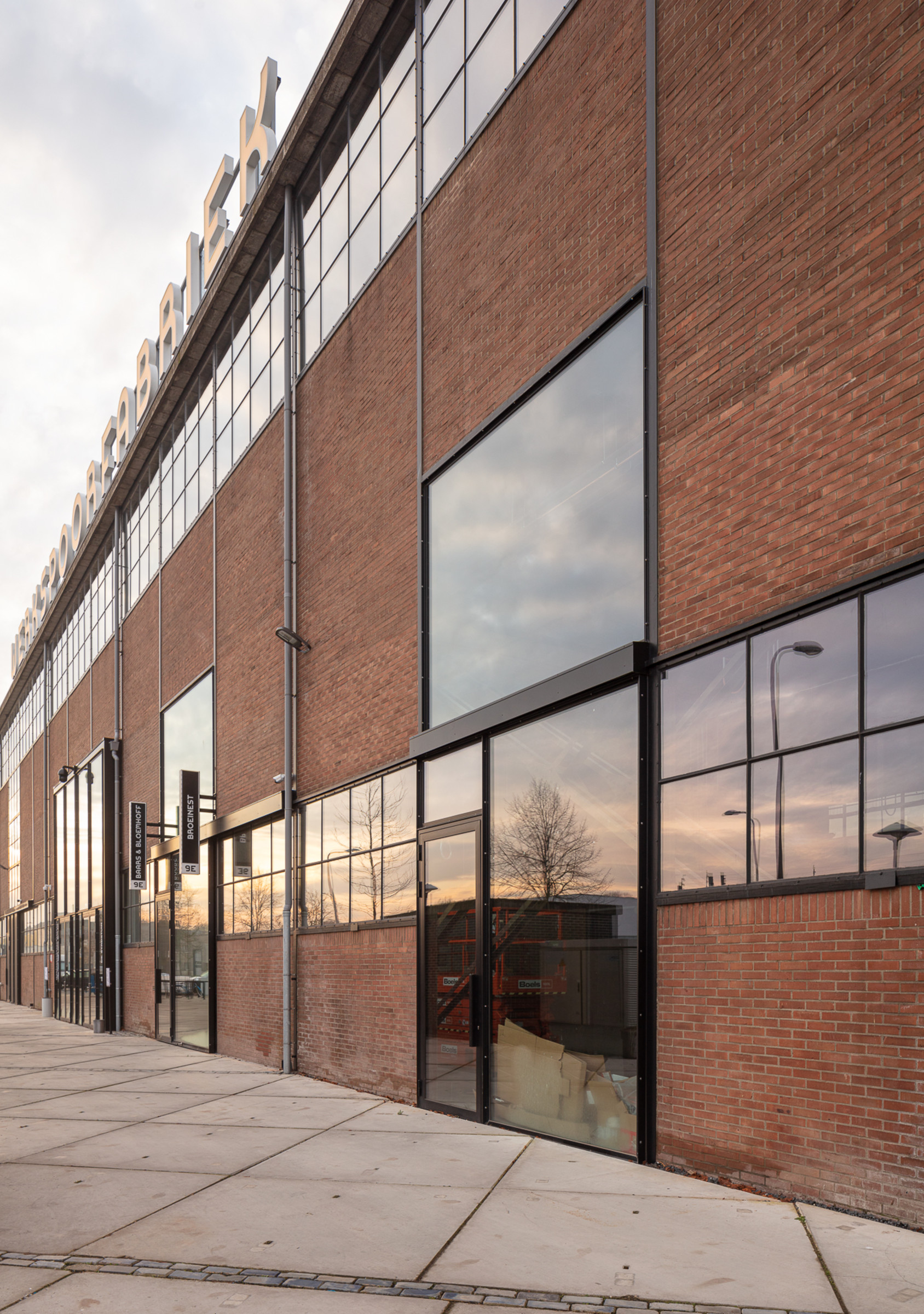 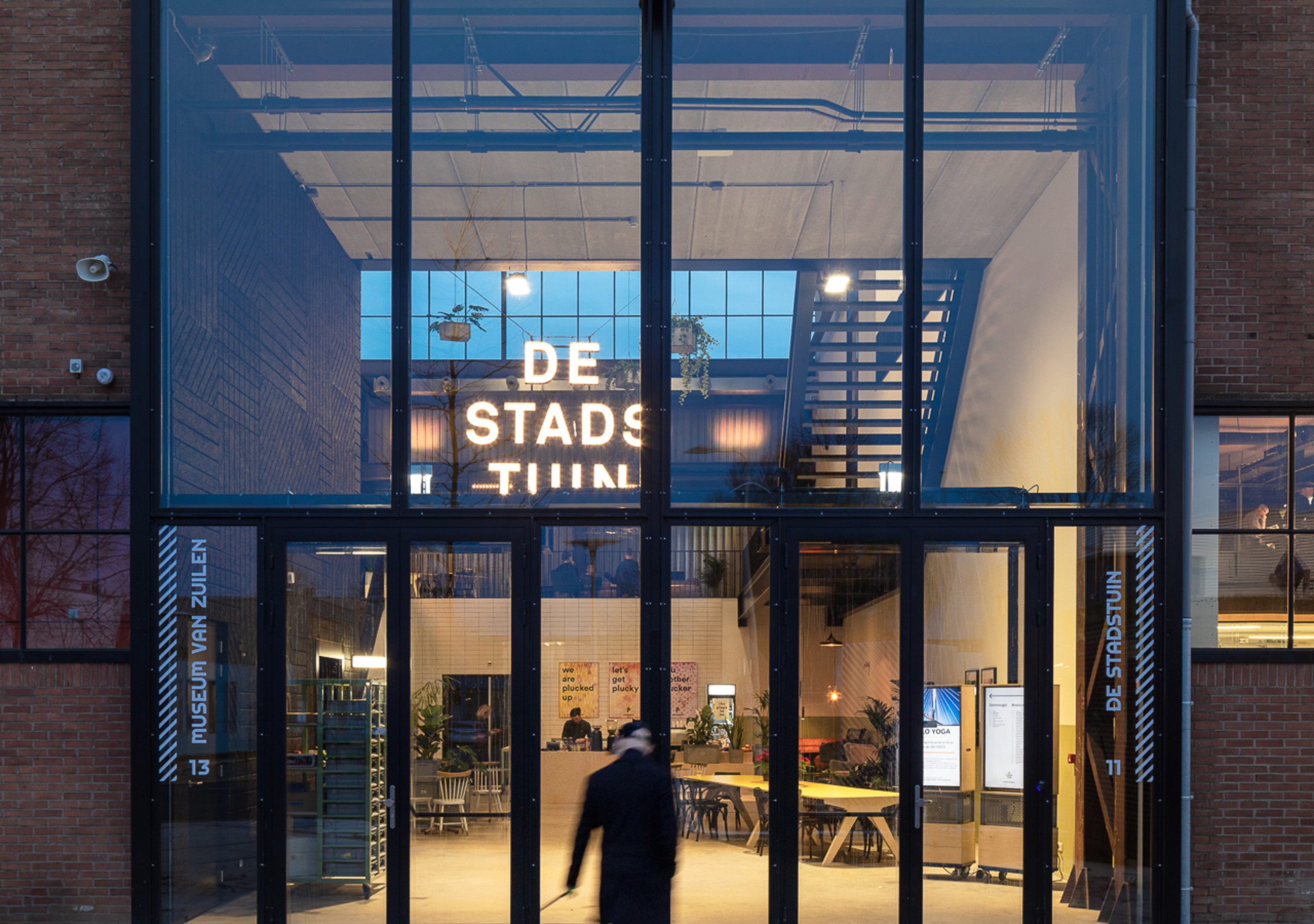 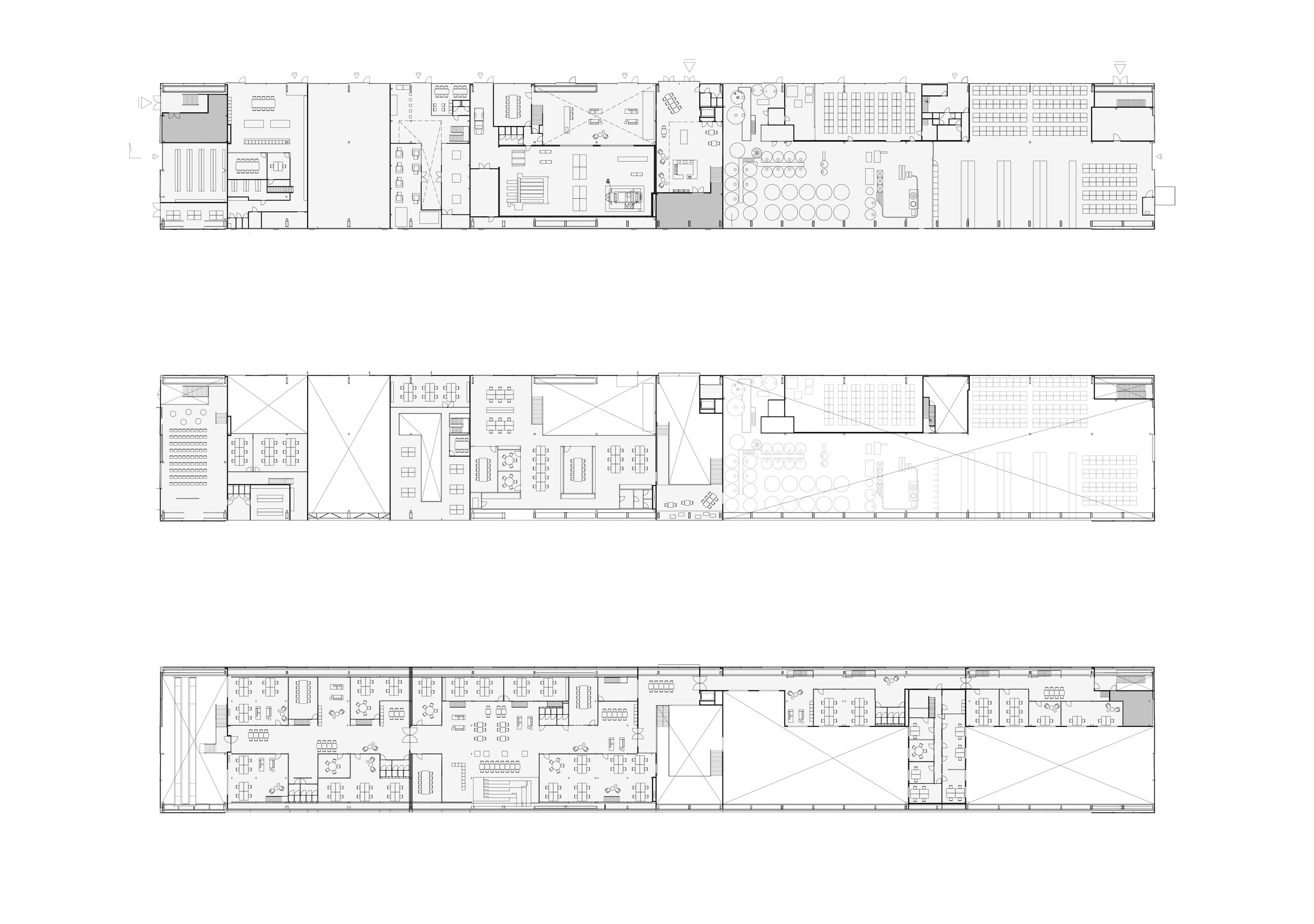 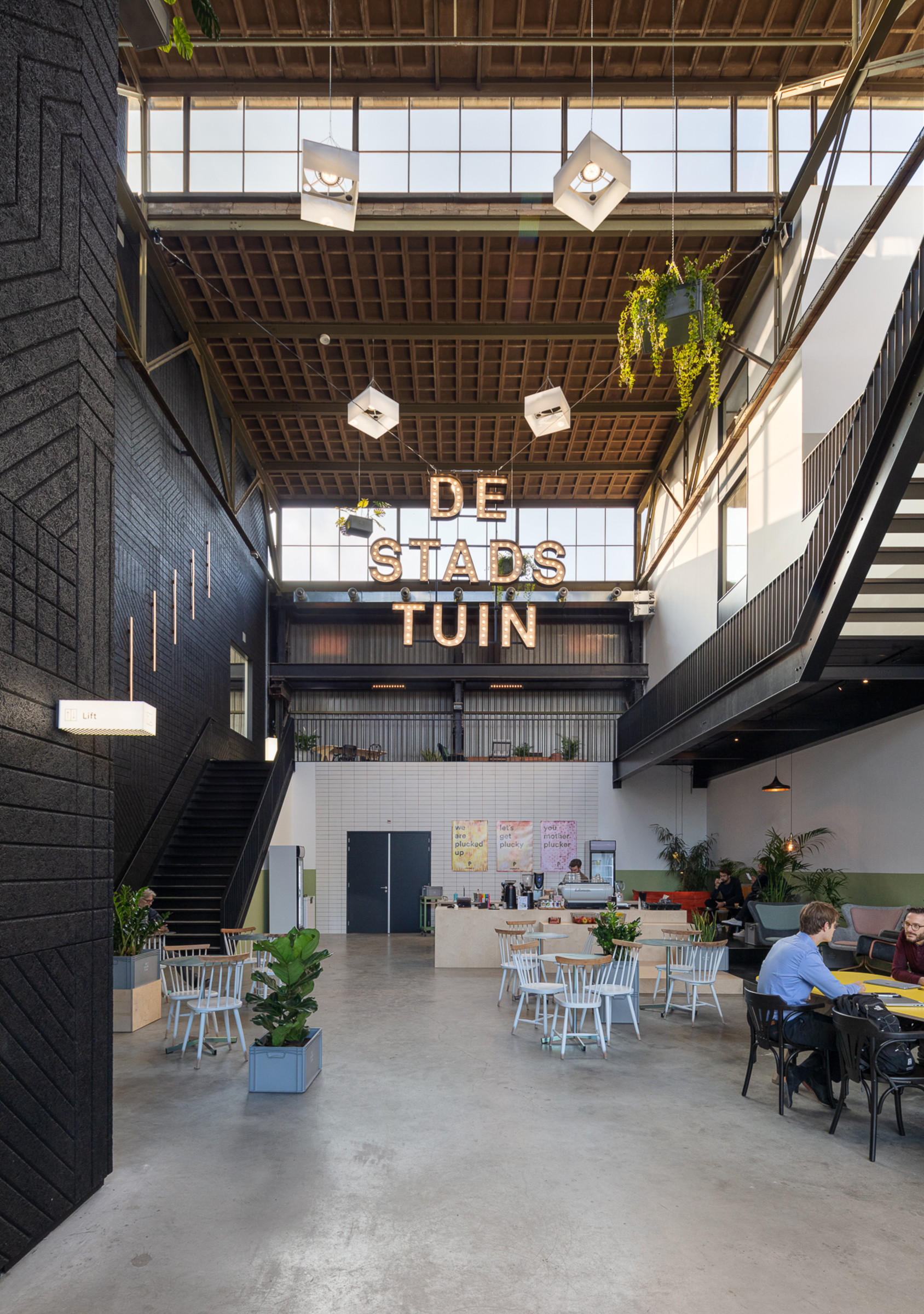 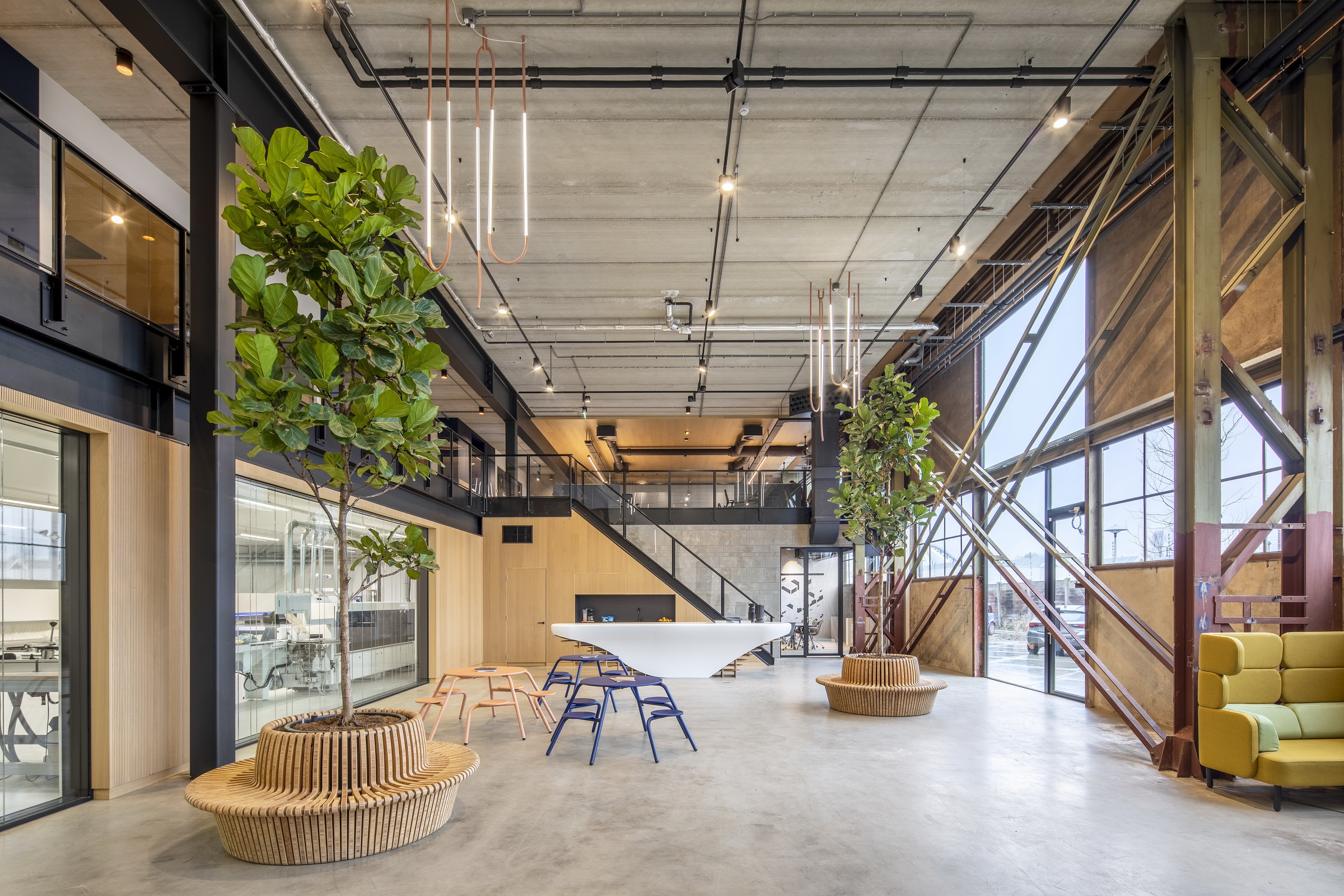 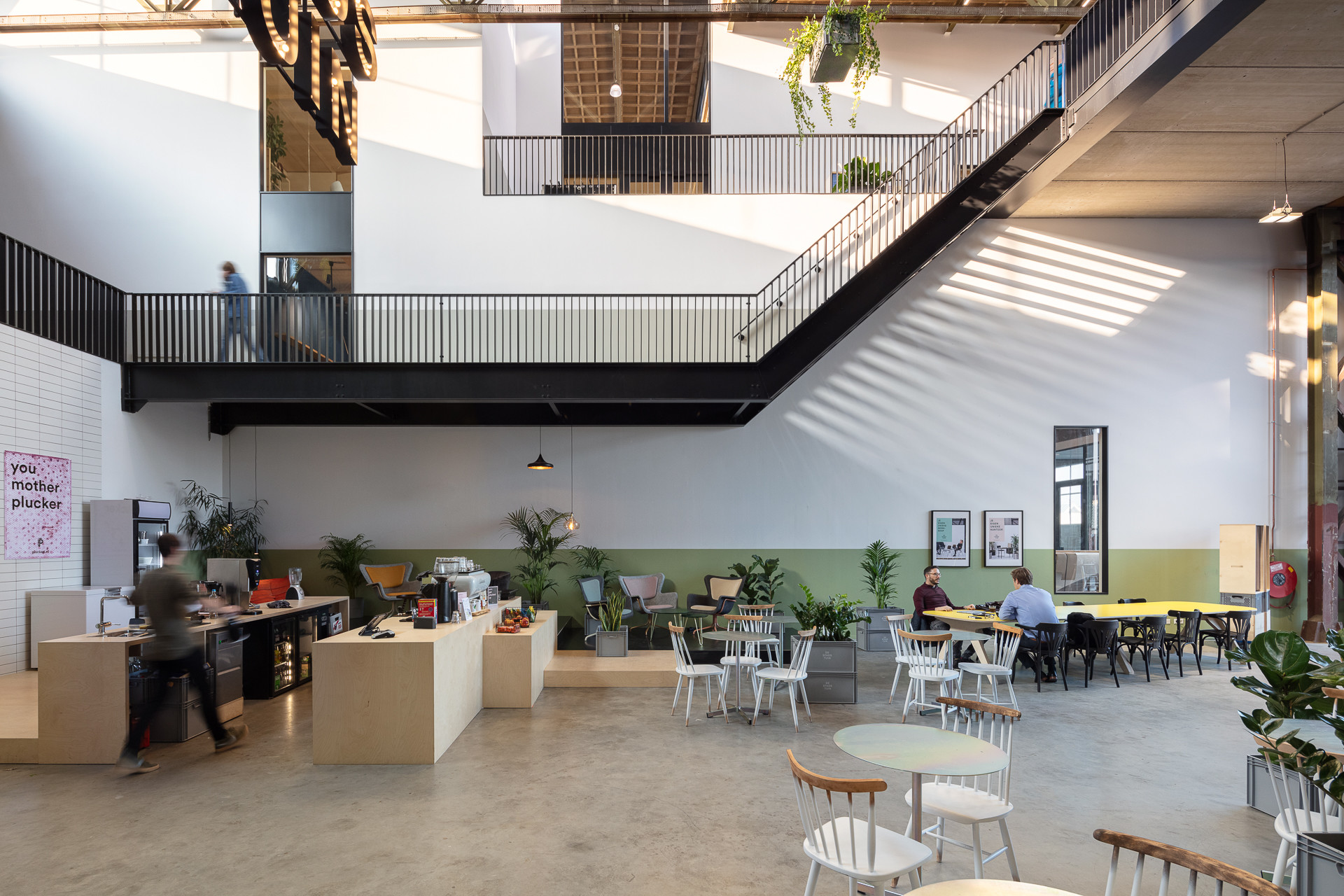 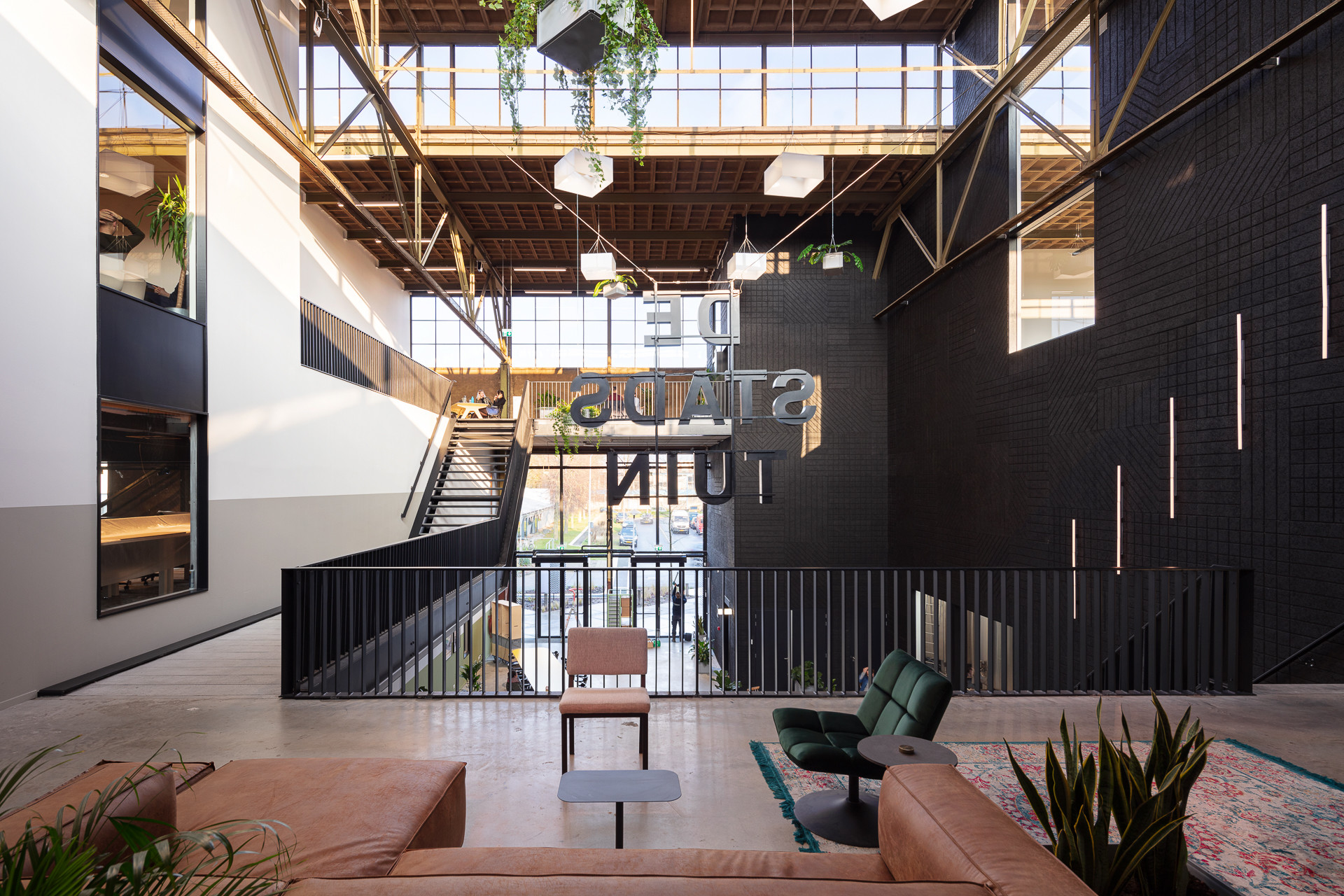 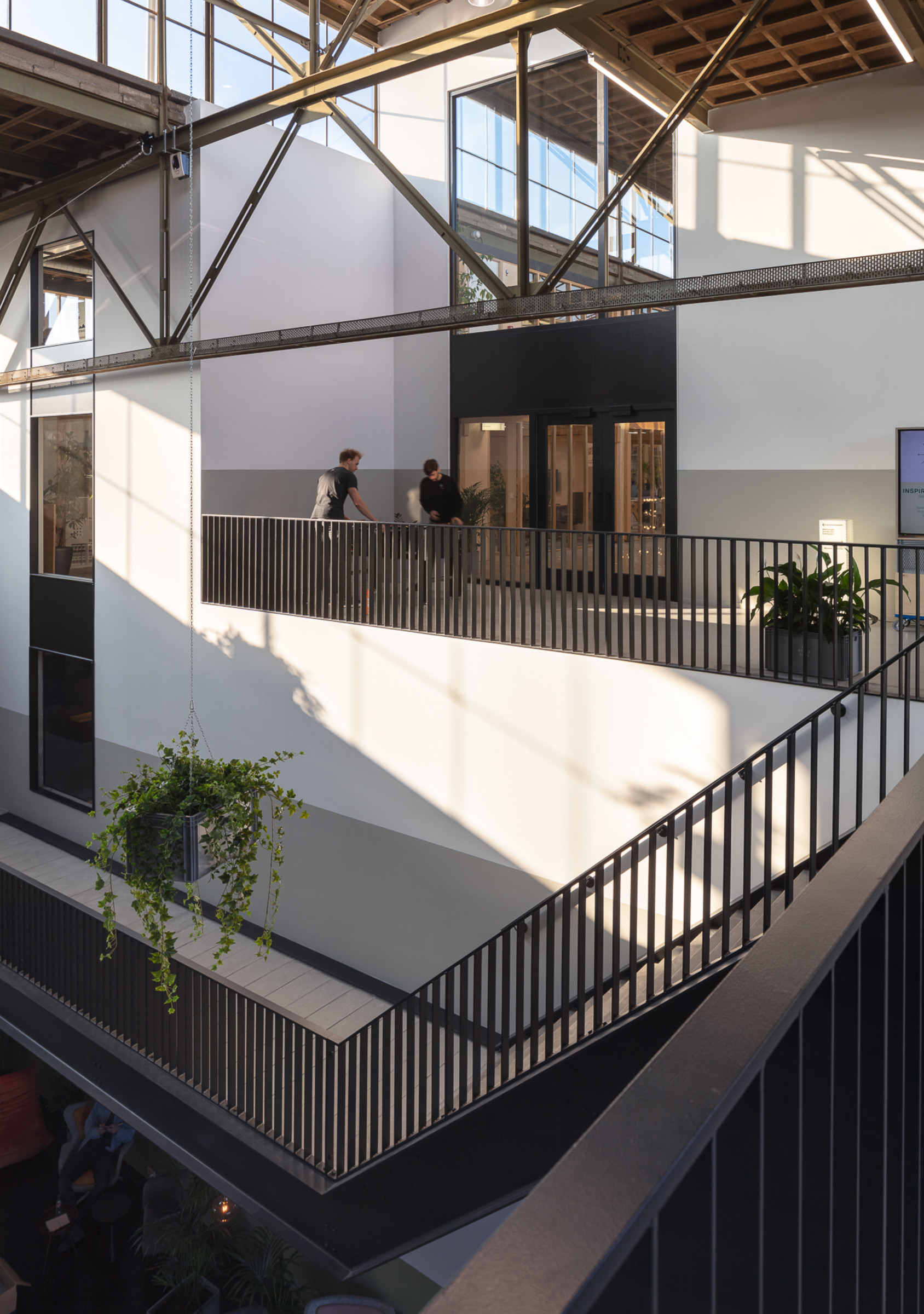 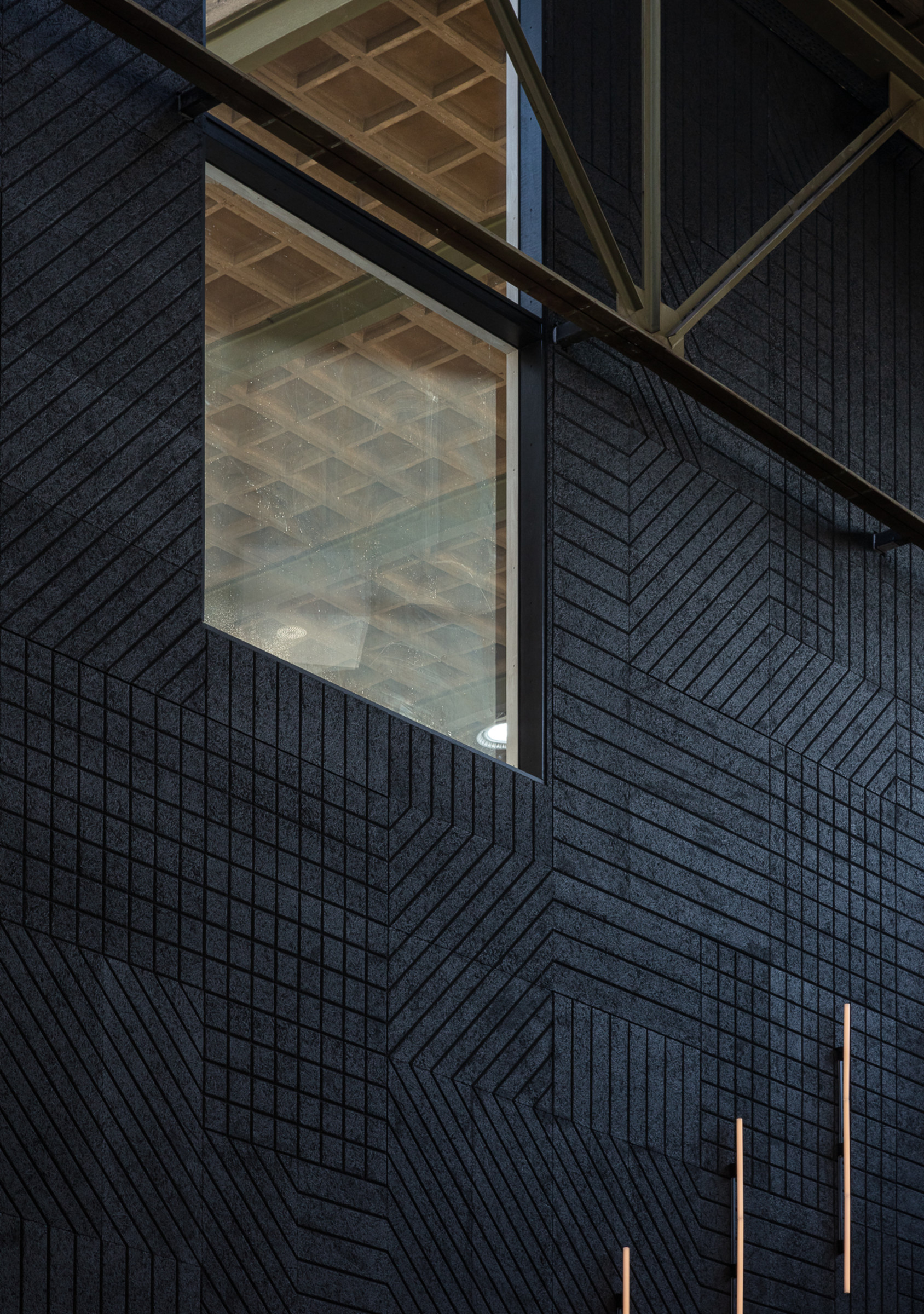 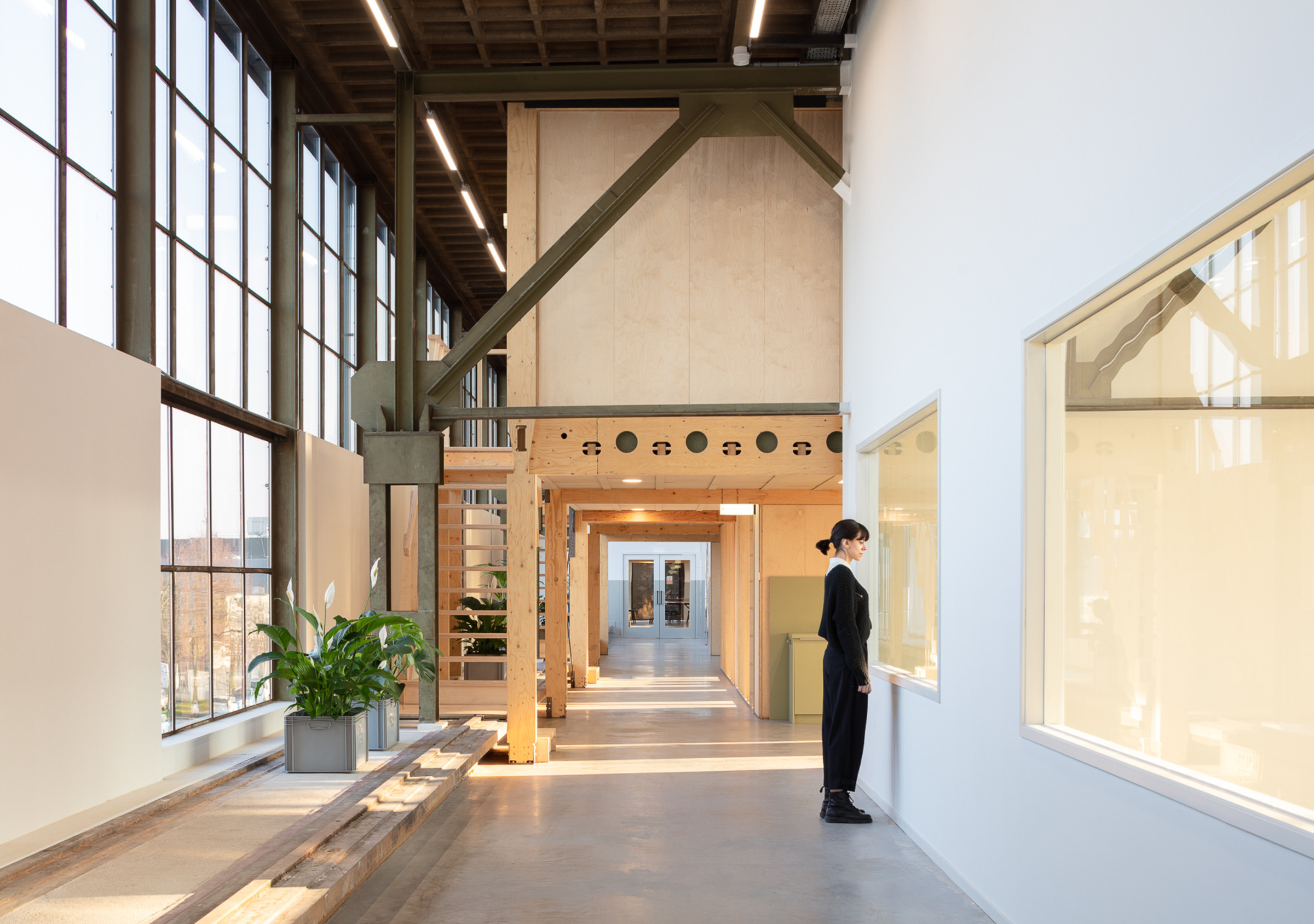 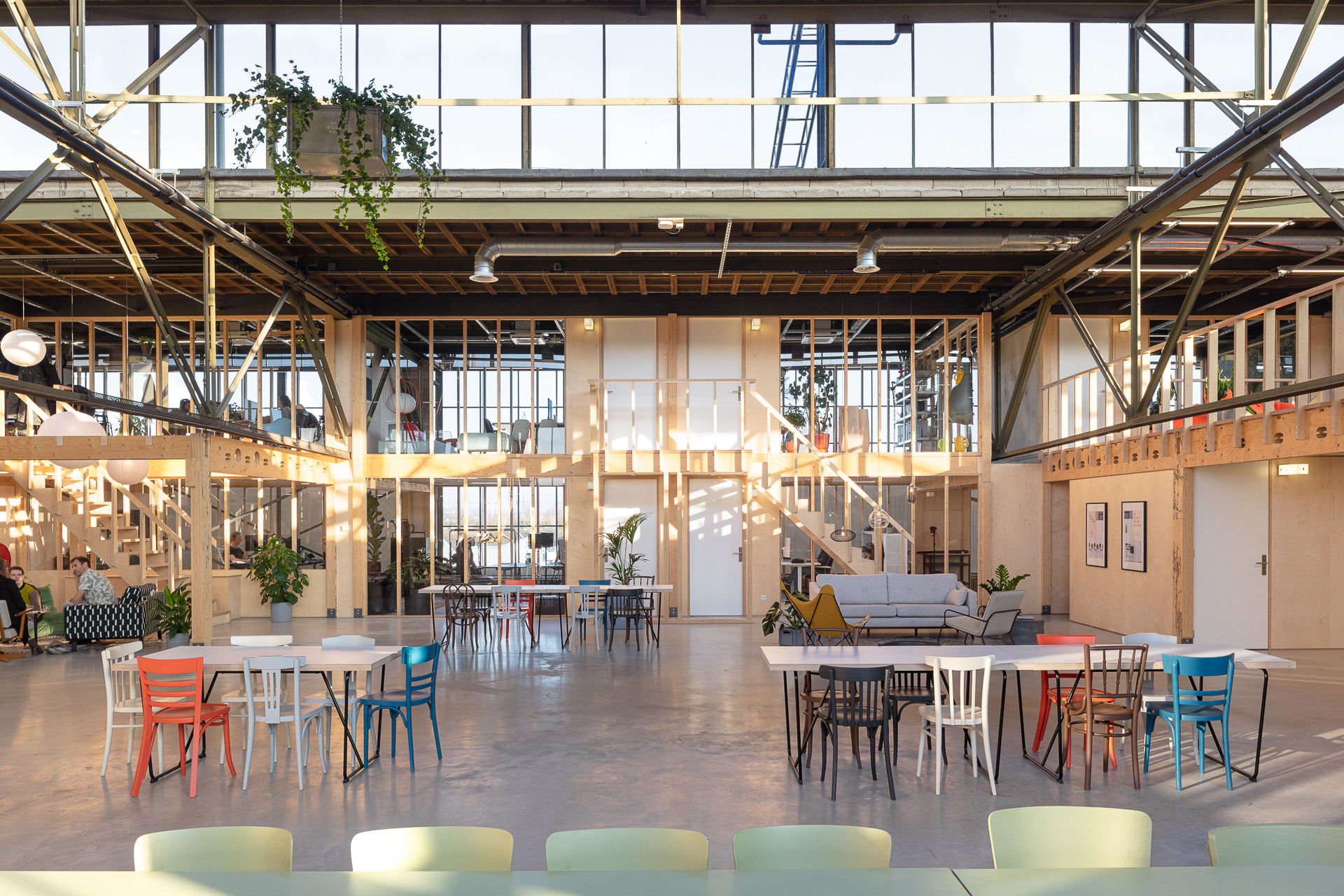 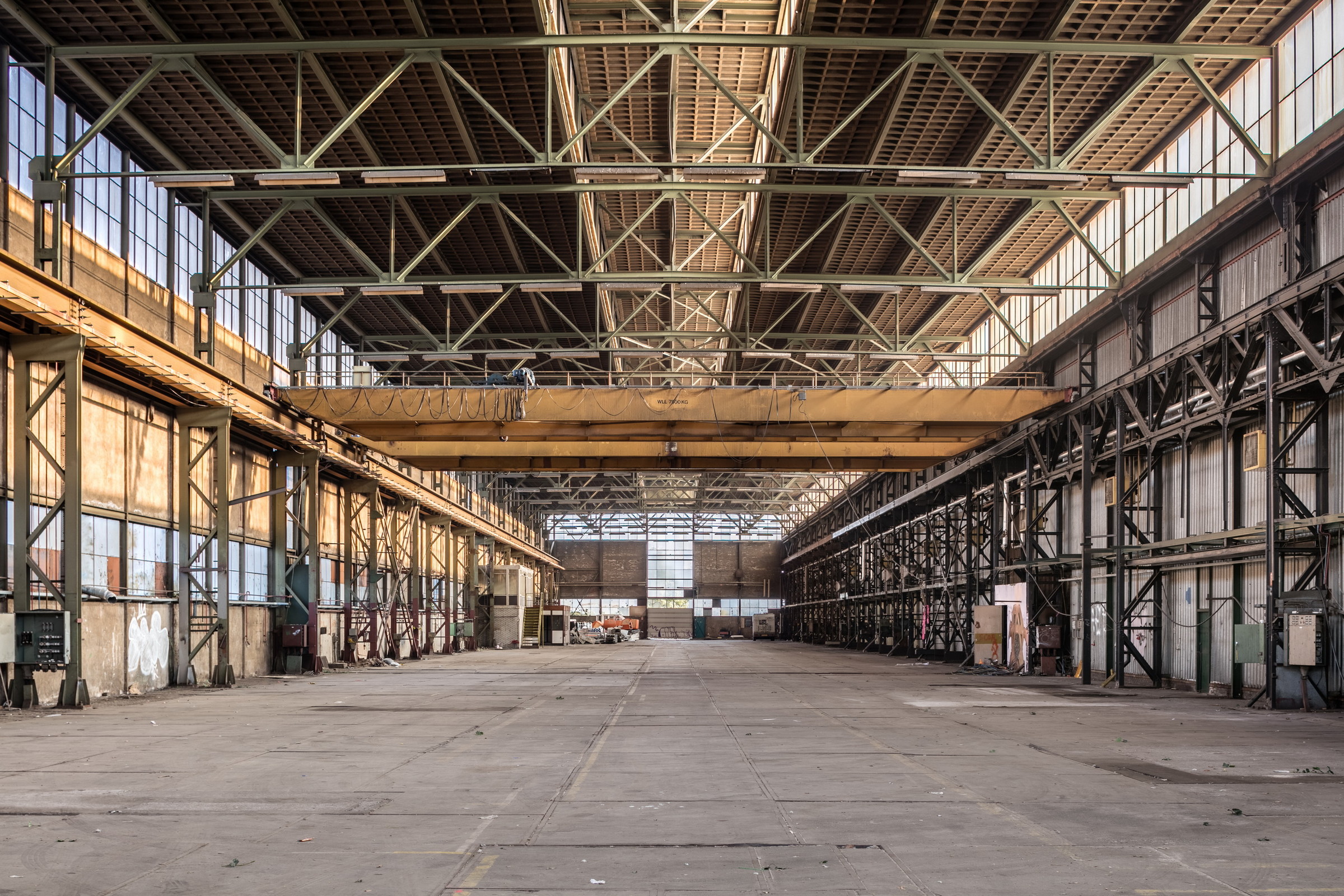